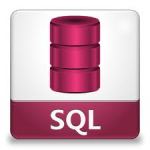 SQL or structured query language is a useful relation-based structure that allows one to go query the raw data and then work analysis magic on that data. I decided to brush up on my SQL skills and completed the exercises on Learn SQL The Hard Way. While I was brushing up I decided to also learn a new text editing style / editor called “VI” which shares much in common with the text editor “VIM“. Vi is built into all unix-based machines so that alone makes it very useful. Also compared to other editors such as Nano that are built into the console Vi integrates commands that allows one to write code more efficiently. Specifically Vi allows ones finger to never leave the keyboard when writing code. The advantage may not seem apparent to those used to using a keyboard and mouse together to write code, but to those who code more frequently Vi/Vim offer a lot of benefit in time and ease.
For those who have heard of SQL pronounced (“Sequel”) but aren’t sure of the core of this language. The core four functions are rather basic and if you have used excel you can use this analogy. Everything consists of tables. So a sequel database is much like your excel workbook. Each tab in the workbook is a table in the database. Rows and Columns in excel are Rows and Columns in SQL. There are four core methods in SQL called “CRUD”: